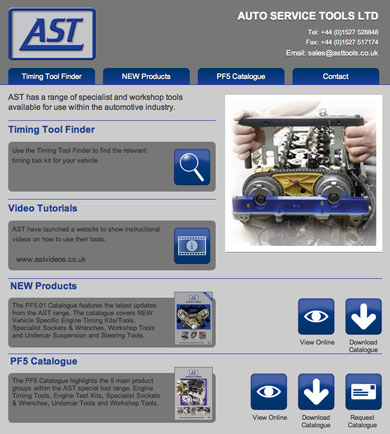 AST wanted a website that showed their range of tools and could be updated with the latest product catalogue.

From the initial meeting with AST it was decided that this site needed to display their product range and be able to be updated when new tools were released. Another feature that was important was to develop a method of enabling customers to search for tool kits for the multitude of car engine types. It also needed to act as a point of contact for potential clients as well as existing customers.

The colour scheme used throughout the site was based on the existing logo that AST already used. The layout had to be clear and uncomplicated as the site was to be used by international visitors who didn't necessarily speak English. The site also needed a way to display the catalogues online as well as for them to be downloadable.

Layouts and wireframes of the site were created and once approval was gained, work started on the site. It was at this point that the icons for buttons and links were designed and added, and the method for displaying the catalogues was also planned and created. Putting the tool catalogues online helped AST move away from printing many copies of their catalogues and shipping them internationally, which in the process saved the company money.

Once the basic structure of the site was created, the next phase was to create the toolfinder. This involved creating a database of all the engine types and the timing kits that are available and developing the interface to search for those timing kits.

Not long ater launching the website AST updated its catalogue and the online version was updated as well, so that the latest products were always viewable online.